Information and news about concussions in American football, wrestling and hockey is widely available, however it is important that all parents and players are also educated on the importance of concussion awareness in soccer.  During the FIFA World Cup final, Christoph Kramer of Germany suffer a concussion and that has brought some awareness and concern about concussions in soccer, but it’s not only a concern for professional players, it could happen to anyone, even a spectator, watching the game could accidentally be hit by a ball and experience a concussion.

This Summer one of our players was hit by a high speed ball during a pre-game warm up, and thanks to the information learned through the resources developed by the Public Health Agency of Canada the coach was able to assess the player’s symptoms as a concussion and advised the player to go home and see his family doctor.

As coaches we are all doing our part at making the players’ safety our greatest priority, however is important that parents and players are also aware of concussions, signs, symptoms and what to do in case you suspect a concussion.

Note that if a player experiences a concussion BRI FC will require a doctor’s note in order for the player to come back to practices or games. 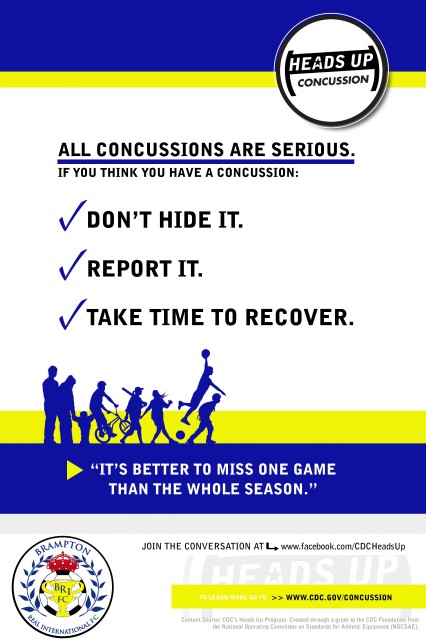